KCWC - Day 5 and about time I finished something! 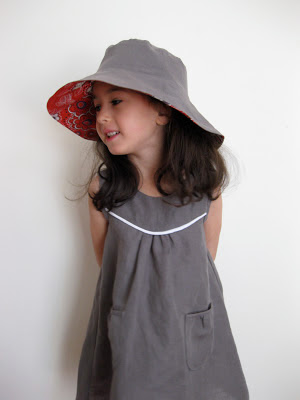 Pattern: 'Sandy Games' dress, Burda Style May 2012. Borrowed it from the library and have been feverishly tracing patterns as they cruelly give you only one week's loan.

Sewing: I hardly know where to begin. I'll skip past the trauma of tracing the pattern from a giant sheet of paper with ten thousand multicoloured lines on it and go straight to the flawed fabric, which turned out to have two pale lines running through it, only one of which I noticed before starting so that - despite fussy-cutting - I ended up with a front dress piece adorned with a vertical white line. Returned fabric to Spotlight, they gave me an extra metre and I started the process again. Wash, dry, iron, cut. Not happy.

Then the yoke. It took me four tries (and one destroyed yoke) to get the damn thing attached to the dress front. Bits kept catching in the seam, whichever side I sewed it from. My unpicker got its best workout in years; the whole project came perilously close to being thrown in the bin. But I persevered, despite the fact that the instructions in the magazine might as well just have said 'assemble dress' for all the detail they gave. At a certain point I began to wonder how on earth the back of the dress was going to be done up, since there didn't seem to be an instruction to sew it and the pattern called for only one button. Eventually the penny dropped - this thing is supposed to be open at the back! Hence the 'underdress', which I thought was optional! I'm still not sure if I'm going to make the underdress or just give up and sew up the back of the 'overdress'. Underdress, overdress... I'm over it.

To summarise, this simple dress has caused a lot of grief around here. In the time it took me to cut it out and sew it I could have flown to Germany, located the Burda headquarters, found the people responsible and strangled them. Still, the children's clothes in this edition are incredibly cute... so I might have to try just one more pattern before I buy my plane ticket. 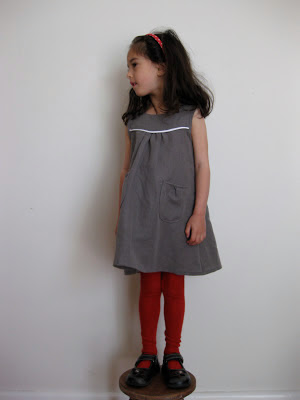 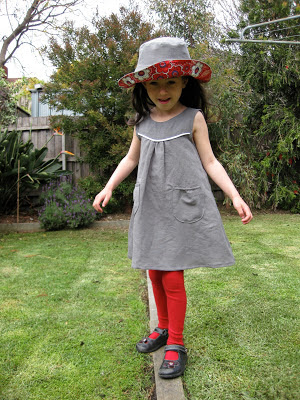 Fabric: Linen-cotton blend from Spotlight (managed to avoid the dreaded white lines this time, hooray!) and red flowery voile left over from a blouse I made a while back.

Sewing: I love patterns that come together easily and well. And it's my second time making one of these so it was extra-easy (although it still took hours). Plus I figured out why the last one I made was too small: the PDF had opened in 'preview' instead of Acrobat and had printed off-scale. This time I made a medium, took care that the 2" squares on the pattern pages were to scale, and it fits R fine with plenty of room to spare. Not sure if I will still add some straps later or not.

Here in Australia a hat with a narrow brim is pretty useless, so I widened the brim by 1.5 inches. Because my hand-sewing is terrible I used Jessica's tutorial to sew the hat entirely by machine - I think this method is way better than the one called for in the original pattern. Oh, and I interfaced all the voile pieces because the hat would have been overly floppy otherwise. 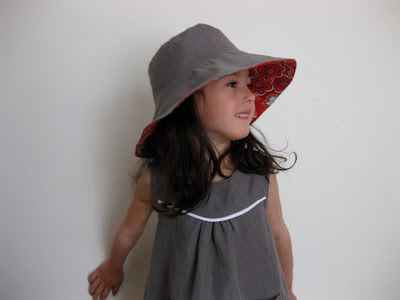 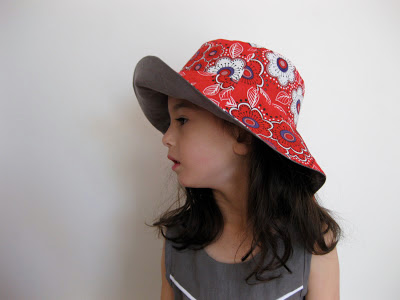 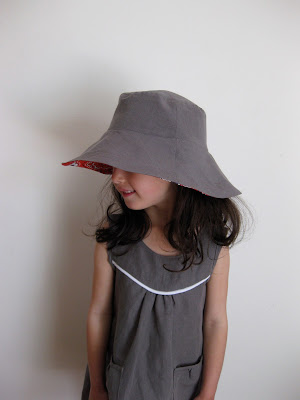 It felt very satisfying to finish something in one evening. Now watch this space for my two beach robes...
Posted by marisa at 16:40