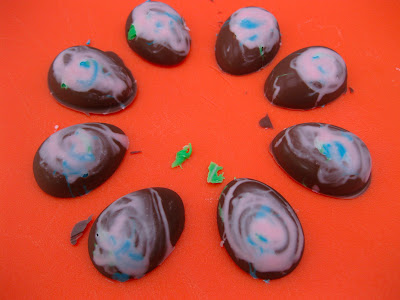 K and R wanted to make Easter chocolates for family and friends. With little cups of melted, coloured white chocolate (just light colours, as too much water-based food colouring makes the chocolate seize up) and a set of paintbrushes I keep especially for this purpose, the children painted splodges, splatters and spots into chocolate moulds. 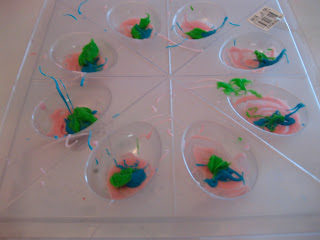 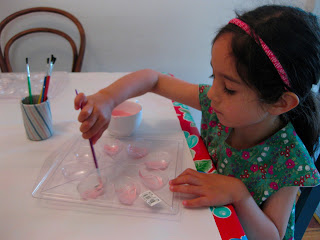 I froze the painted moulds for a short time, then poured melted milk chocolate into them before putting them back in the freezer til they were completely cold. It was such fun to see the coloured eggs pop out of the moulds! 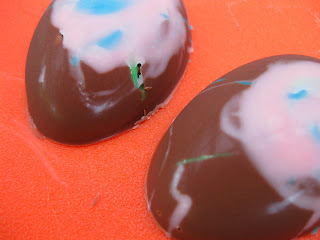 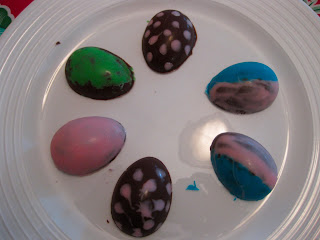 With all this chocolate-making (accompanied, naturally, by a lot of chocolate-eating) and because our lovely neighbours were organising an Easter egg hunt, I wasn't planning to get the kids anything for Easter. I knew we'd have way too much chocolate as it was. But when my husband said he thought the kids would be terribly disappointed I caved in and made them each a little Easter gift using Vlijtig's bunny pouch tutorial. 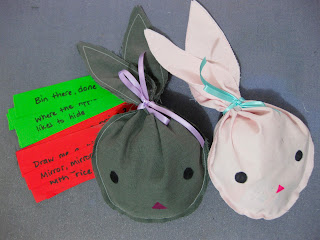 This was late on Saturday night but it was a quick and easy gift, with a few chocolate eggs tucked inside. And because treasure hunts are all the rage around here, I made a series of clues for each child, which lead - eventually! - to their Easter present.
Posted by marisa at 22:05 No comments: 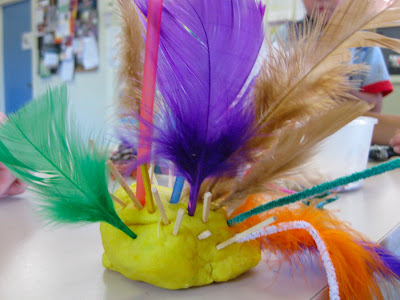 Last night I made a couple of nice new batches of playdough. I usually use a cooked playdough recipe (the one that's on the cream of tartar container), but this time I used a no-cook method, which is basically the same except that instead of cooking the playdough in a saucepan you put the dry ingredients and oil in a bowl, then add boiling water. It's a little less effort and the results are - as far as I can tell - identical. You can find a recipe for no-cook playdough here. 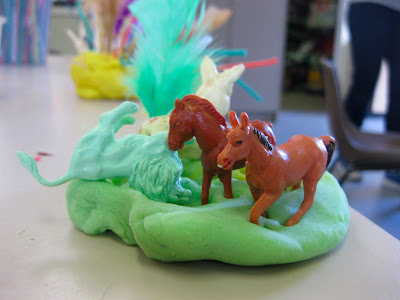 At playgroup I put out the playdough along with feathers, straws, matchsticks, pipecleaners and some small plastic animals. Some children stuck things into the dough; others played imaginative games with the dough and the animals. 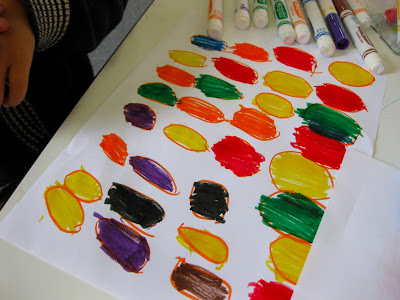 R was happy poking things into the playdough for a while, then - typically! - invented her own activity: drawing Easter eggs. She then spent a long time painstakingly cutting out each egg. She tells me she is planning to hand them out to all the children at our playgroup Easter egg hunt next week. Sweet!
Posted by marisa at 21:25 No comments:

While Dana and Rae have their 'celebrate the boy' thing going on, I happen to have just finished a boy project. Sadly, this is a relatively rare achievement for me. While there are lots of examples of cool handmade boys' clothes around (just check out the celebrate the boy flickr group), most of them are for younger boys, not gigantic 8-going-on-9-year-olds like mine. The things that look good on K are clothes made of heavy-duty fabrics, with industrial strength double stitching and little details like rivets and eyelets - not the kind of things I feel confident with sewing (and, to be honest, not the kind of things I feel inspired to make). So when I make things for K, I tend to avoid clothes and come up with alternatives: camera cases, cushion, heat pack, wallet. But there is one exception: pyjamas. I have made a pair of these every season for a while now, but I cheat a bit by sewing pants or shorts, then buying a t-shirt and appliqueing something on it to match. Cotton for summer, flannelette for winter. Predictable but useful. Something comfy that makes him feel loved, and that looks a bit smarter than the greying old 'I heart Bali' t-shirt and undies that he's been wearing at night. Presenting this year's PJs (which may well represent this year's boy sewing, too): 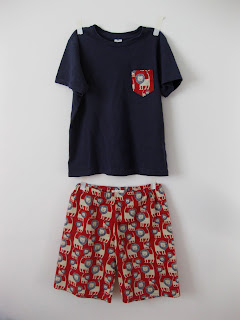 I really loved this lion fabric when I saw it in Spotlight last year. And I don't know how useful a pocket on a PJ t-shirt really is, but it performs an important function in preventing it from looking exactly like the t-shirts K wears to school each day. 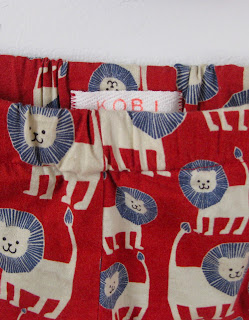 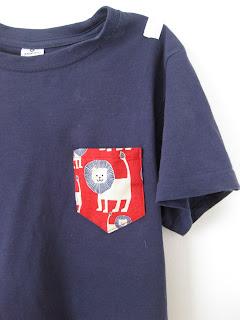 Lastly, I have learned from my (many) mistakes and put a label at the back of the shorts so he can put them on the right way around.
Posted by marisa at 23:52 No comments: 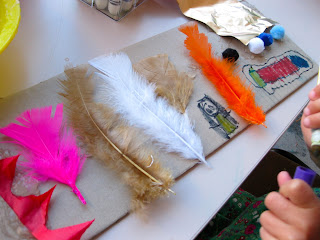 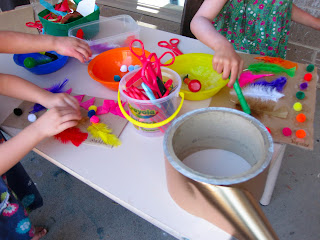 I gave them some nice thick paste because the more three-dimensional materials like pom-poms and feathers need a lot of glue. It's helpful to use a sturdy base such as cardboard for this kind of activity - I just cut up a couple of boxes into vaguely rectangular shapes and let the children choose the size they wanted. I also put out scissors and the roll of gold paper because older children often enjoy cutting out shapes by themselves and it's great to encourage scissor skills. For her second collage R requested textas and added some drawings. 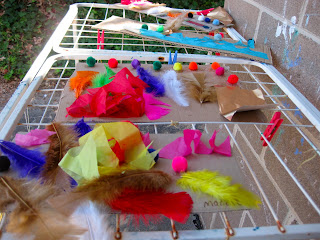 The results were wonderfully colourful!

Our plants didn't fare too well when we went away for a week - I had them watered every second day but it was a relentlessly hot week in Melbourne and we arrived home to some sad and wilted-looking chillies, dried-up tomato plants and parched strawberries. Luckily we were able to revive almost all of the plants - and then came the rains, giving everything way more water than it actually needed (I have picked a lot of split tomatoes since then). 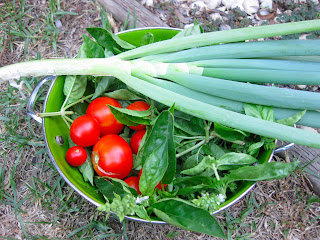 This weekend I made pesto from some of our basil and tossed some halved tommy toe tomatoes through the pasta just before eating. Sadly we are inbetween lettuce crops and had to use supermarket lettuce, but we did have a delicious supersize home-grown spring onion in our salad.  I used to think it wasn't worth growing spring onions, but I've come to appreciate the benefits of having a few handy for when I run out of bought ones, and they deserve credit for being the one plant that insects, snails and birds don't attack.

My husband has been getting huge crops of chillies from his various plants, although some late-harvest varieties are yet to ripen. He has rocotos, cayennes, Thai, birdseye, habaneros, jalapenos and several others (I've kind of lost track of what they all are at this point - all I know is that they're everywhere, in little collections of pots in every corner of the front and back garden!). Here are the chillies that he and K picked yesterday: 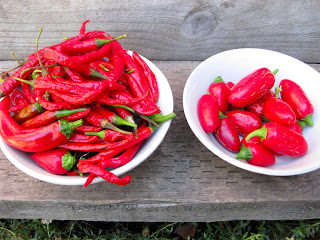 And here is the sauce he made from them today, which he based partly on this sambal oelek recipe from Suburban Tomato (thanks, Liz!) and partly on another recipe which included coriander and palm sugar: 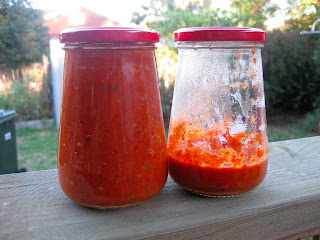 He seems very pleased with the results but I can't vouch for the sauce because, embarrassingly, I'm too chicken to try it - some of M's chillies are way too hot for my taste. I am, however, keeping a basket of chillies from last week's harvest to dry out and use in cooking: 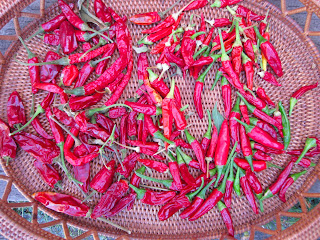 Not sure if I'll string them together in bunches (tempting, because they look so beautiful) or just toss them in a jar (far more practical) but I'm sure these will provide me with all the dried chillies I need for the next year or so - while M's sauce will last him a few weeks at best. Not that he'll be chilli-less after that, because by then the rocotos will be ripening. The rocoto is a Venezuelan chilli that can grow to 10 feet in height (that's over 3 metres for those who speak metric) and is notable for having black seeds. Last year we kept some of these exotic-looking seeds and, late in the year, managed to get some of them to germinate - a very slow process; we had just about given up when they finally came up. And now M has a precious bunch of seedlings, which we really hope will survive the winter: 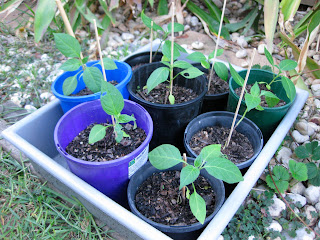 Far easier to propagate have been the strawberries, which sent out runners like crazy. To get more fruit you are supposed to cut them off, but as a novice gardener I found it all very exciting so I let them keep on making their baby strawberry plants. I filled little seedling pots with soil, weighed down the leafy parts of the runners with stones so they could take root in the soil and separated them from the mother plants once they had done so. I have loads of them now, and the plants are still producing more and more: 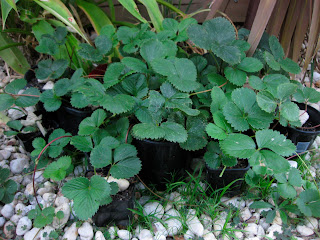 I have to admit, I have no idea what I should do with them over winter. Advice, anyone?

Package from The Netherlands 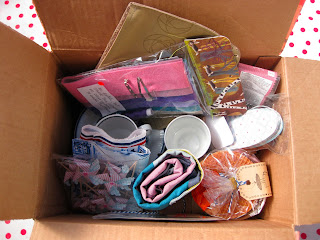 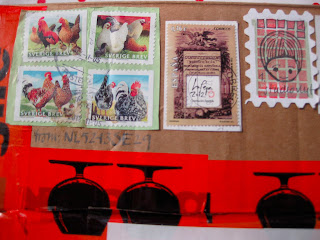 One blog I regularly (some might say obsessively) visit is vlijtig. I can no longer remember how I came across it, but I'm so glad I did. Kristel's posts feature the many beautiful things she makes, and often include links to interesting tutorials from other sites. I love her aesthetic, her blogging style and the creativity that is so evident in everything she does. Late last year she invited people in other countries to do a swap with her, which I thought was a lovely idea.

So it was very exciting when, arriving back from our holiday last weekend, I found a large package waiting on the doorstep. Once I'd unpacked the car, cooked dinner for the children and reunited the door and window keys with their locks (my paranoid husband having removed all keys and taken them with us in case of burglary), I finally opened the parcel to find the most extraordinary collection of lovely things: a fabric shopping bag (which folds up compact and closes with a button), a leather zip pouch, a piece of Dutch-themed fabric, a kit for making girls' hairclips and headbands, a hand-carved stamp with my name and blog picture on it... plus some Dutch treats and several other cute little things. And packed at the bottom, encased in bubble-wrap, were two cups and saucers - so beautiful (and intact, despite their long journey!). 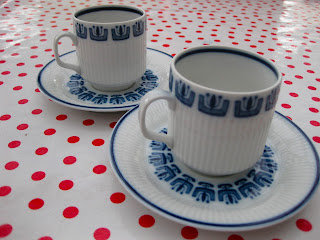 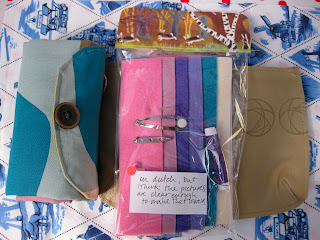 Thank you Kristel for your wonderful and thoughtful package.
Posted by marisa at 23:28 No comments: