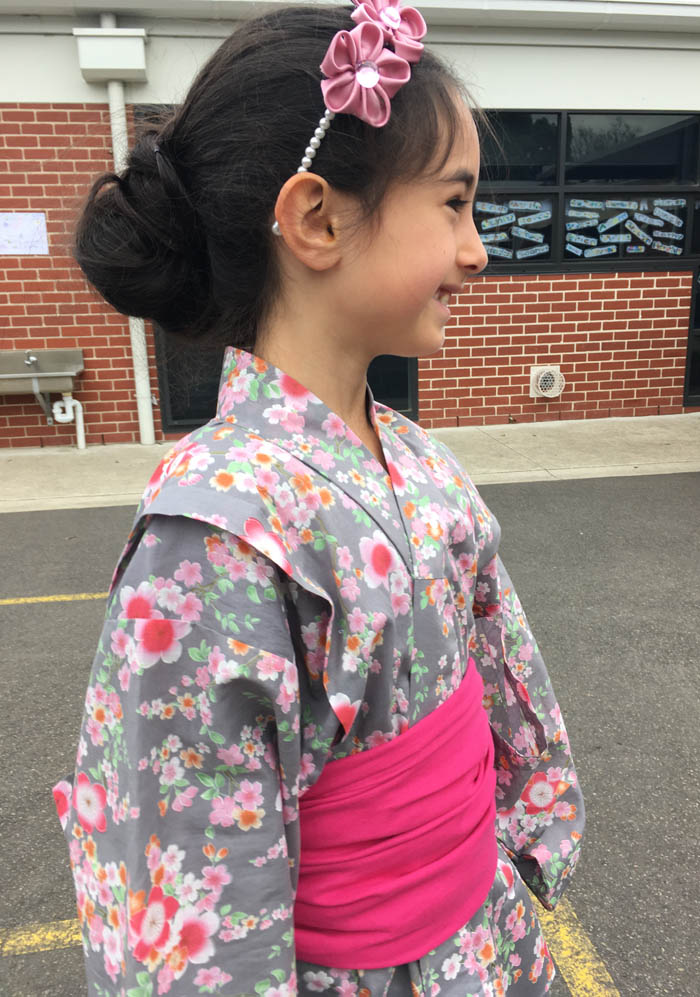 R asked me to make her a special outfit for Japanese Day at school: a yukata (summer kimono). How tough could it be, I thought, as I ordered a cute-looking pattern from Amazon Japan. Sure, I had no idea what a yukata looked like close-up, nor how they were traditionally constructed, but given my years of sewing from Japanese patterns I didn't think it would be much of a challenge. 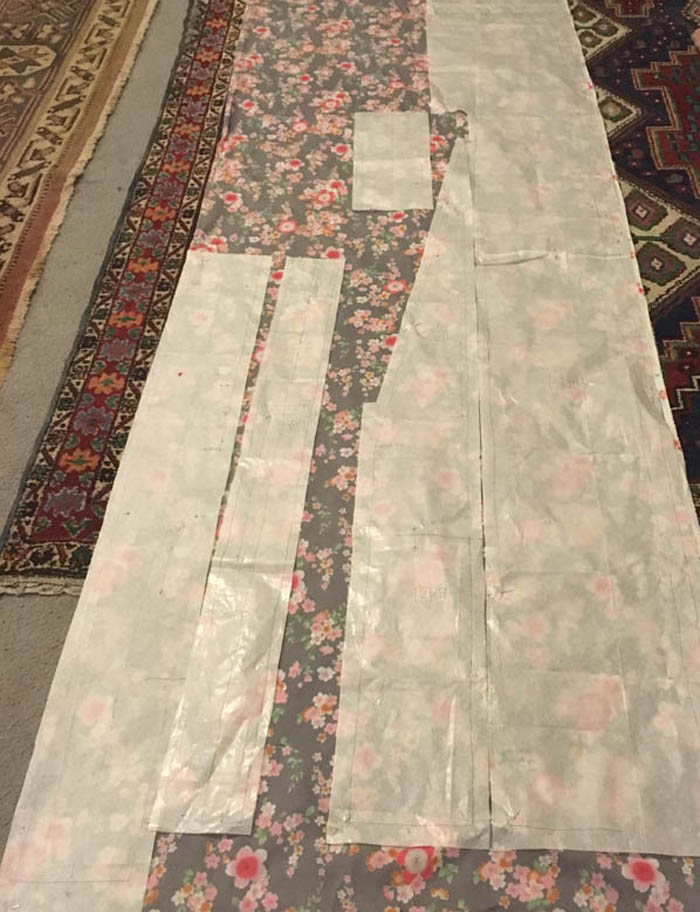 The pattern arrived and I realised that a yukata is made from mega-long pattern pieces that form both front and back sections - there are no shoulder seams. This requires a good few metres of fabric, which immediately ruled out just about all the fabrics I liked due to budget constraints (because how much is it really reasonable to spend on a school fancy dress outfit?). Eventually I found some Japanese-themed voile on sale at Spotlight that worked quite nicely.

The Japanese teacher at my work lent me a yukata so I could see how it was made. This helped me make sense of the bizarro pattern pieces, although being an adult's yukata it was different from the one in my pattern, which had the tucks at the shoulders and waist which - I have since figured out - are there to allow the garment to be let out as the child grows. 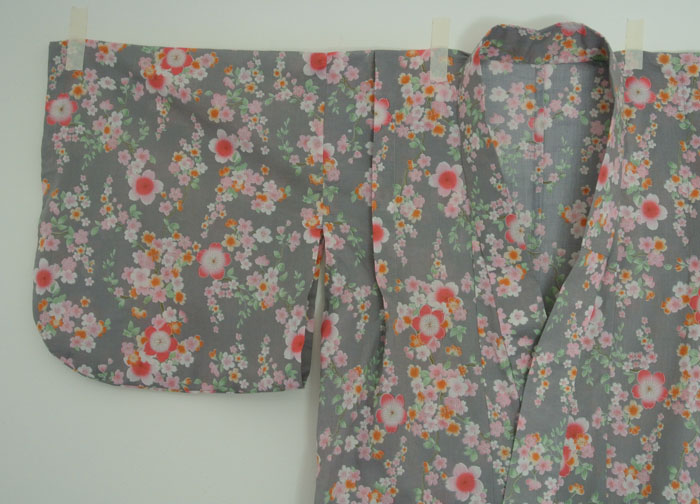 So I sewed the yukata, which, once I'd got my head around it, was quite simple (this series of posts on sewing a child's yukata was helpful). I even changed things up a little and used French seams so it would look neater from the inside. Then came the obi. I found some dimensions from a shop selling them on Rakuten, and, using some soft voile from my stash, sewed a giant sash (basically a massive long rectangle). Things were so rushed in the lead-up to the 'big day' that I didn't have time to try the outfit on R in advance, but in the morning I used this tutorial to help me tie the obi. 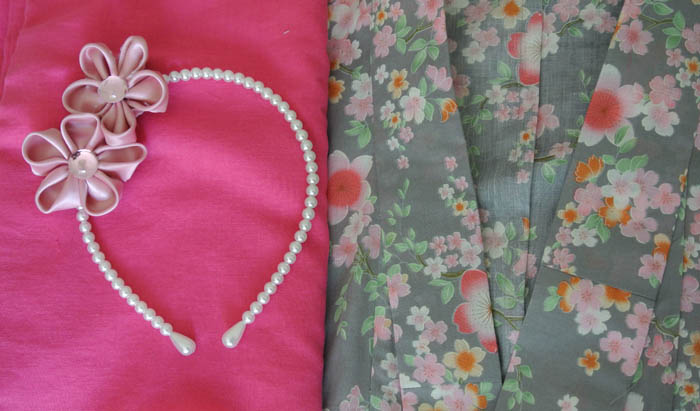 I spent an embarrassing amount of time admiring kanzashi hair ornaments on the internet and ambitiously had a go at making my own, but after two ribbon flowers I'd had enough. Cutting and gluing tiny bits of ribbon is really not my forte, but luckily the two I managed to make before giving up looked quite nice when attached to a two-dollar shop headband, and R was thrilled with her new accessory. 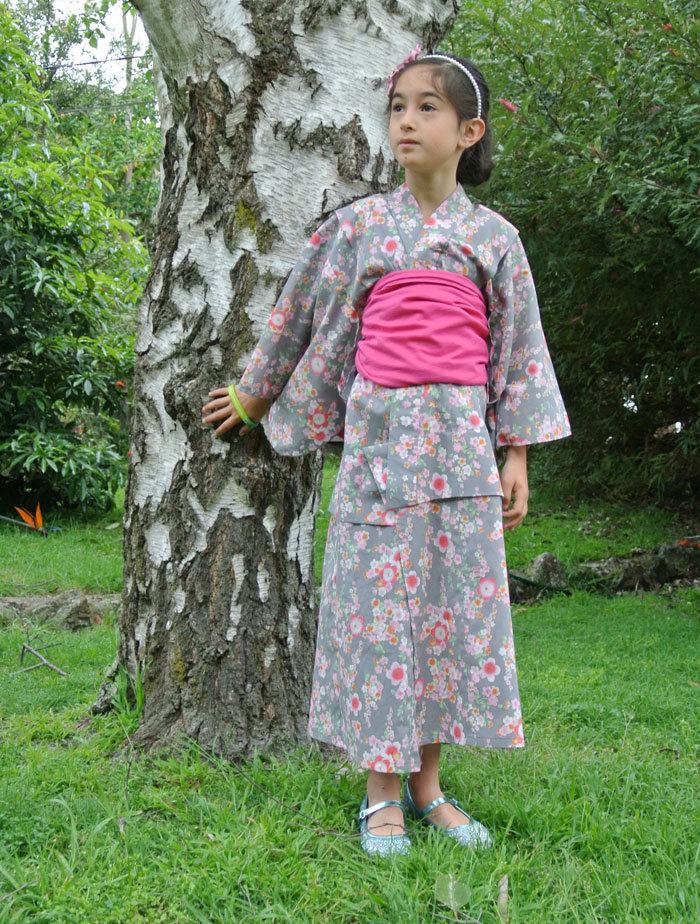 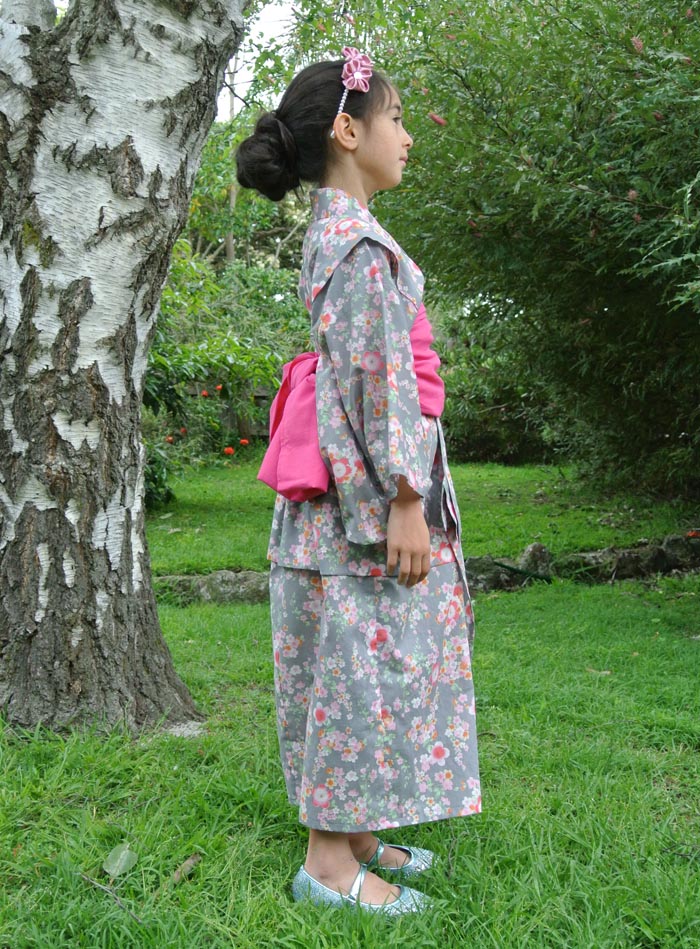 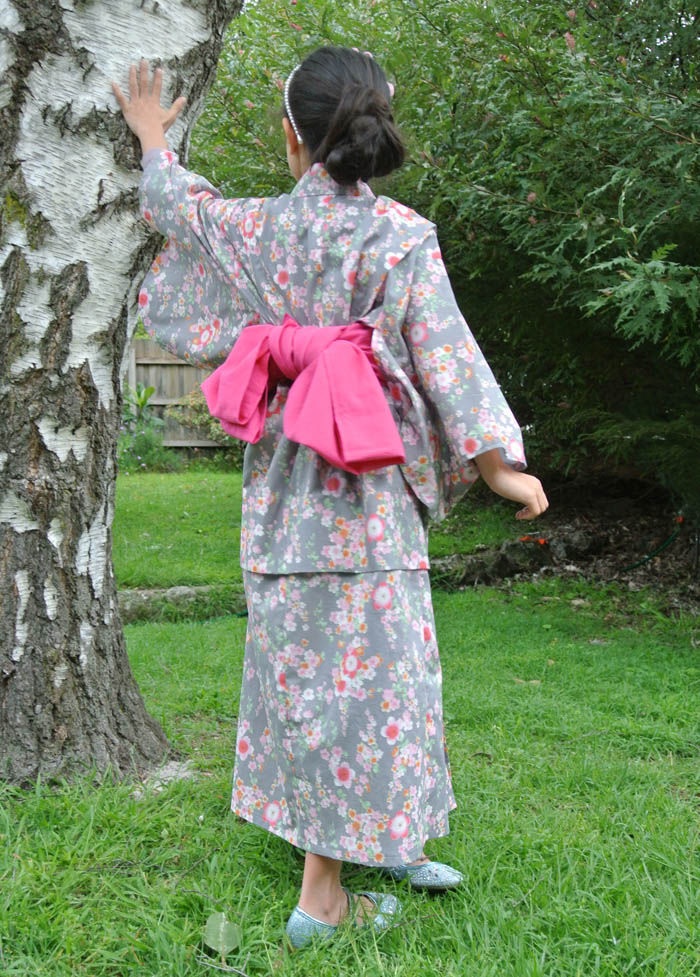 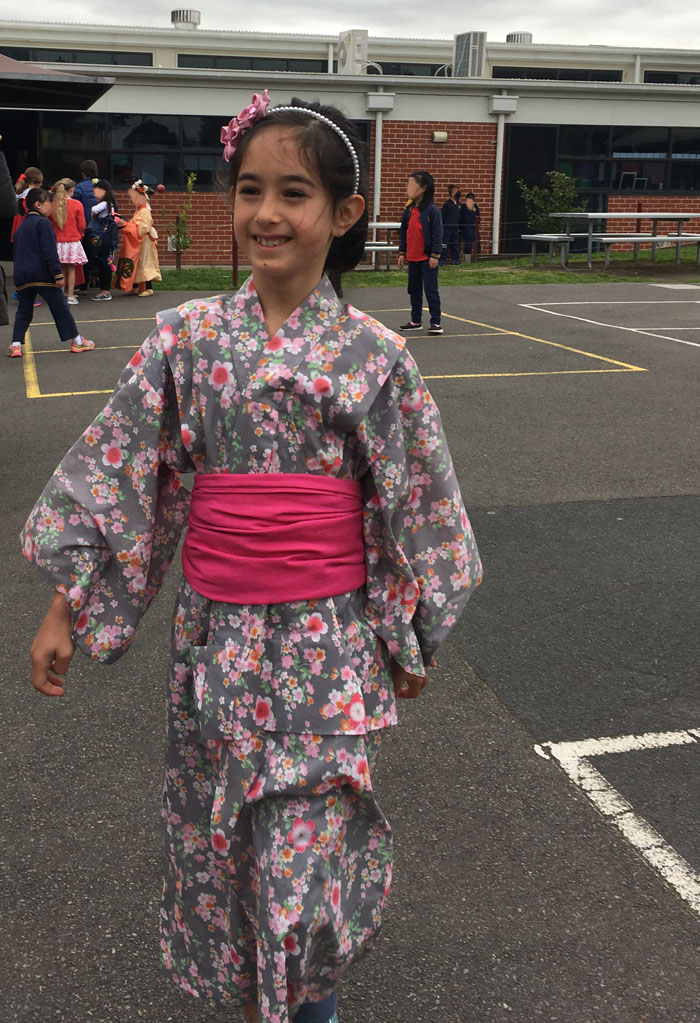 At school I watched R walk around, smiling sweetly as people admired her outfit. She continued to be a sweet little Japanese girl even after she came home that day, and I thoroughly enjoyed watching her bow to me and pretend to be polite! Given the generous tucks in R's yukata (meaning that it is likely to fit her forever) I'm not expecting to have to make another, but since I've got a grip on the general construction principles I think I'll have a go at a jinbei, which has a very similar top section. I just have to find the right fabric and finish a few WIPs first...
Posted by marisa at 23:55 10 comments:

Living in the 70s - a floral dress 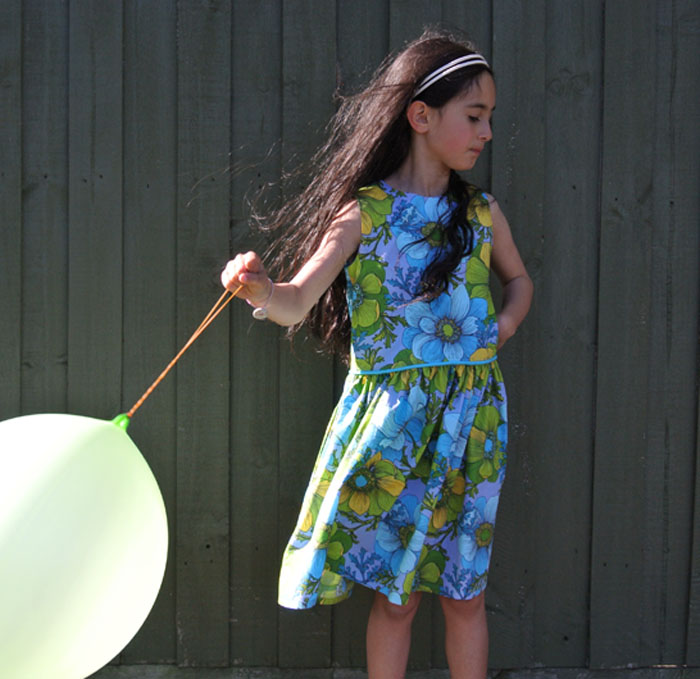 A roll of fabric on the clearance table at Spotlight caught my eye. I pulled it out and was immediately reminded of a 1970s curtain - or maybe a doona cover. So I put it back and went home, only to find that images of the blue, green and yellow vintage print kept popping into my head. Those who spend way too much time obsessing over fabric will understand that I was compelled to go back the following day and pick up a couple of metres. And yes, it does resemble a 1970s curtain, but in a really good way, right? And I just love the colours - perfect for spring. 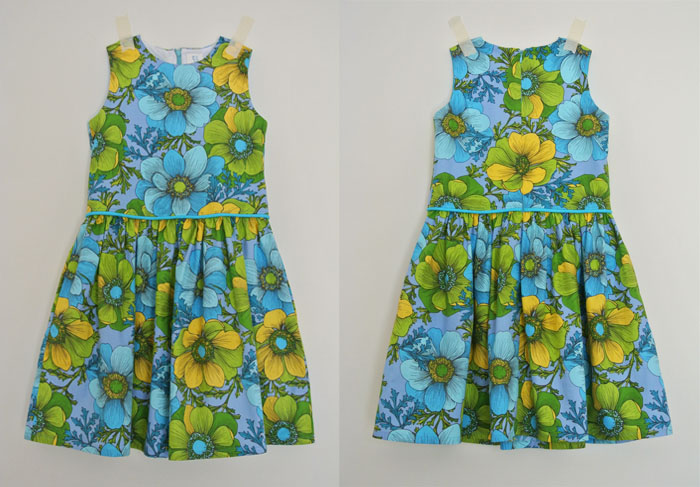 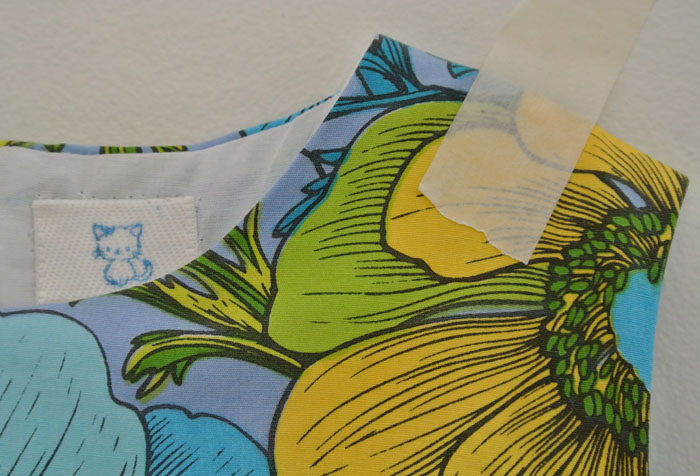 My first thought was to use the fabric (a bargain at $4 a metre, by the way) for a dress in a similar style to the poppy one I made recently. I used a bodice from a Japanese pattern, lengthened it, and added a gathered skirt with piping at the waist. This time I made the skirt wider and included in-seam pockets. The bodice is lined with voile, closes with an invisible zip and has a little stamped cat tag on the inside (because our home is ruled by our cats). I didn't do quite as great a job with the zip this time round, but given the length of R's hair it's not likely anyone will ever see this little imperfection! And because I'm already lamenting the fact that the perfectly-fitted poppy dress will not fit R for long, I made this one a good few inches longer and a little wider. I don't think it looks too baggy, and it should be good for next summer too. 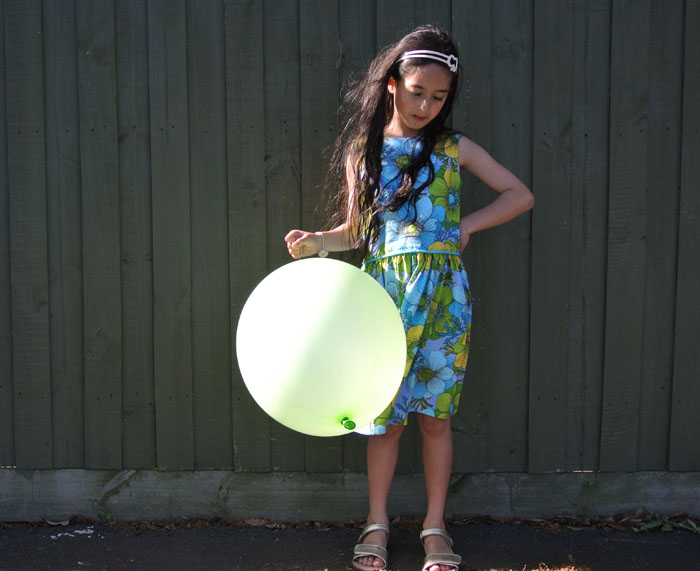 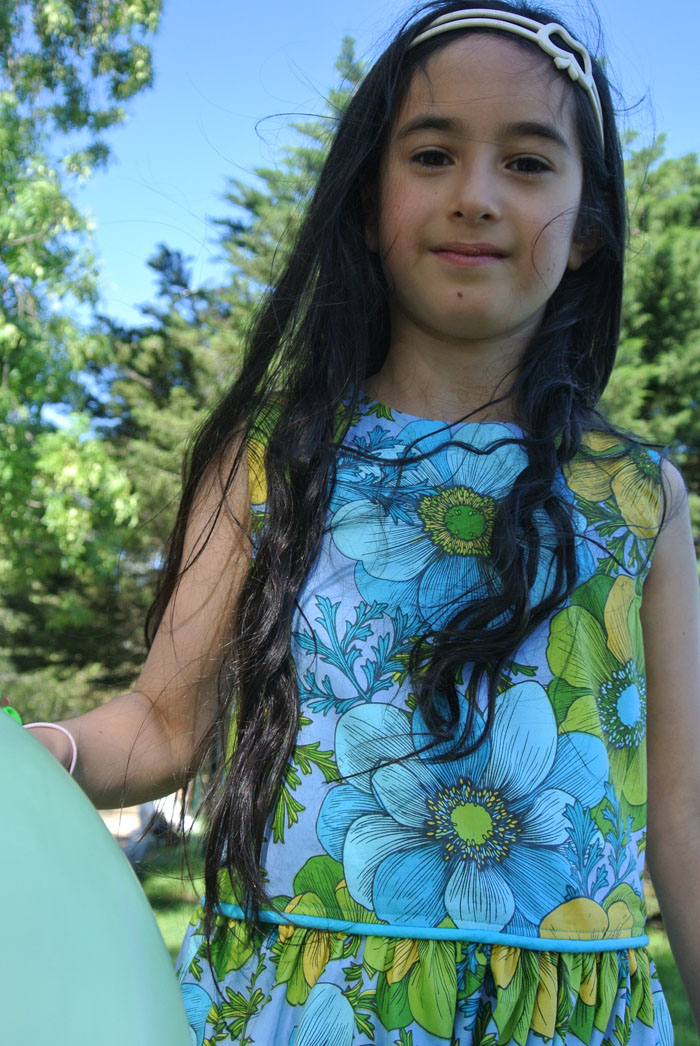 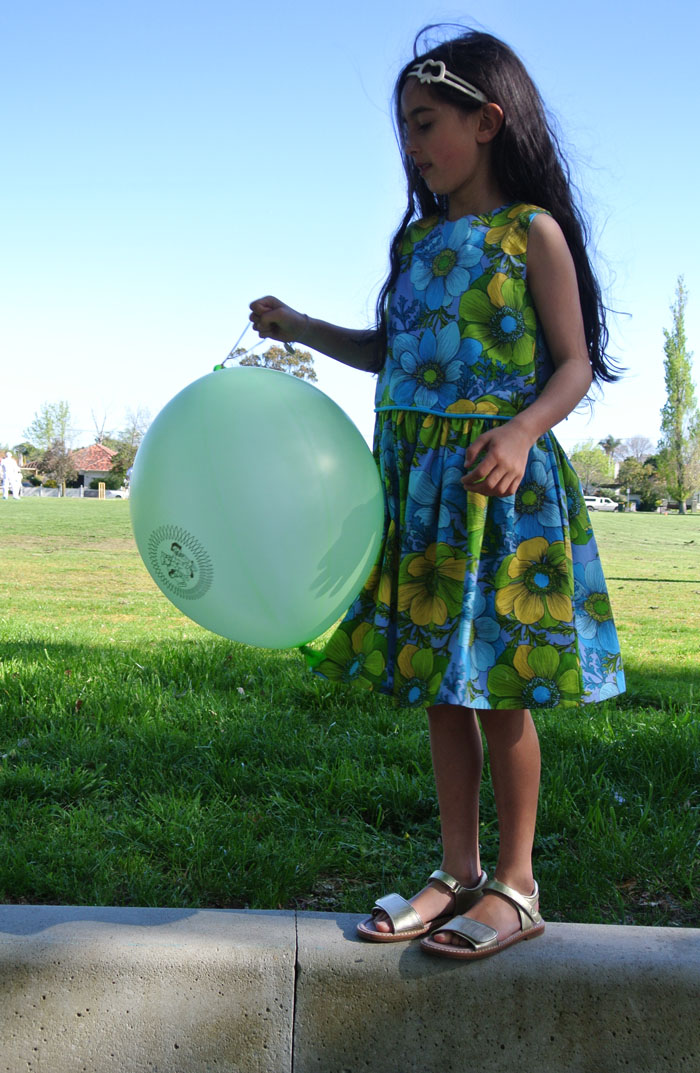 I gave R some 'punching balloons' to keep her amused during her brother's (very long) cricket match today. I must say, they are pretty irritating things, especially when they are being 'punched' right next to your head as you attempt to watch your son batting. They also make a terrifyingly loud bang when they pop, which, of course, occurs when the balloon is right next to your head.

So now I can stop thinking about blue and green flowers and swirls and move on to finishing R's yukata. But I'm not quite done with this fabric yet - I have just enough left to make a skirt for my little niece, who saw the fabric when she was here and pronounced it beautiful. Such good taste and only four years old!