This pintucked dress caught my eye in A Sunny Spot: Girls' Simple Clothes, so when R flicked through the book and announced that she wanted one, I was thrilled! Had I remembered how useless I am at pintucks I might have chosen something else, because I really don't have the knack of lining them up and spacing them perfectly. Luckily I did the back sections first, which gave me a bit of practice before I got to the front. They worked out OK in the end, but I've resolved to buy myself some kind of precision fabric-marking tool (as opposed to chunky bits of tailor's chalk) before tackling anything like this again. Recommendations, people? 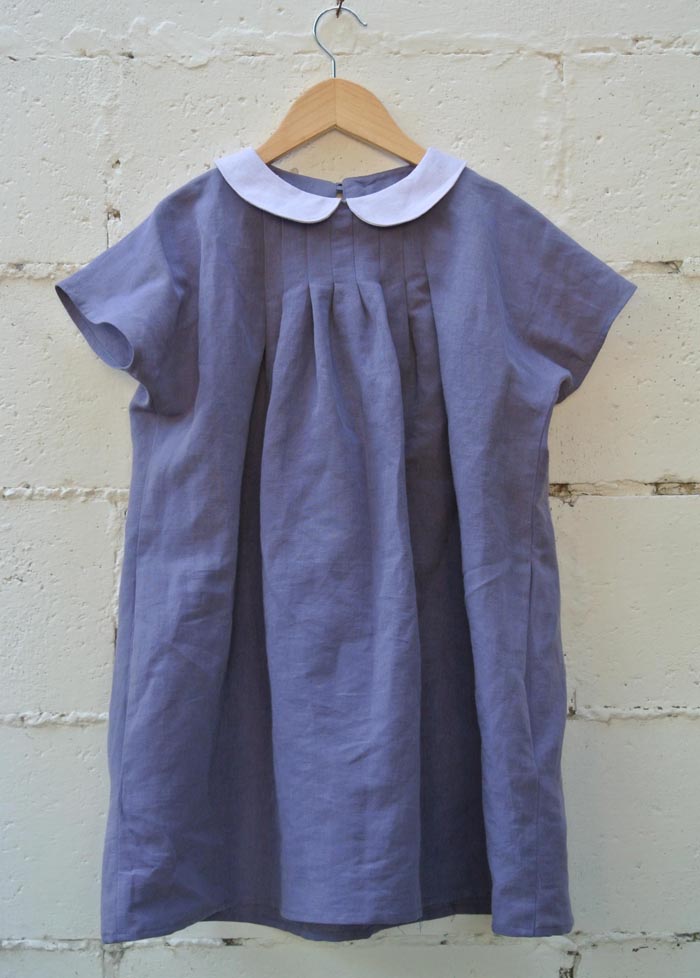 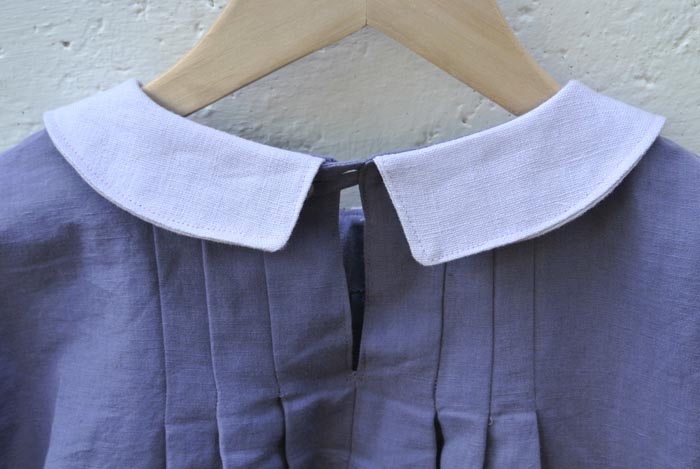 If not for the dreaded pintucks (which are on front AND  back sections of the dress) this would be a super-simple sew. The book includes an extensive photographed 'lesson' on how to sew the dress and its adult version, but really the pintucks are the only remotely difficult bit, because the dress is just one piece for the front and two for the back, plus collar and facings. I added in-seam pockets - a lesson for this is included in the book, too - and made an extra-long button loop at the back in order to place the button right under the collar so R's long fine hair won't get tangled in it.

The fabrics are linen-cotton for the dress and a thicker linen for the collar. I spent ages in Spotlight looking at fabrics and fell in love with an overpriced teal linen. Sanity prevailed and I ended up with a much cheaper linen-cotton in this gentle lavender shade, then spent a further half-hour agonising over the choice of fabric for the collar, finally settling on a very light, subtle pink. This colour combination has really grown on me, and I'm so pleased with the way the colours look together in the dress that it's actually going to be hard to let R wear it (ie spill things on it, wipe oily hands on it and go down filthy playground slides on it). But if you love something you should set it free, right? So, into the wardrobe it goes... 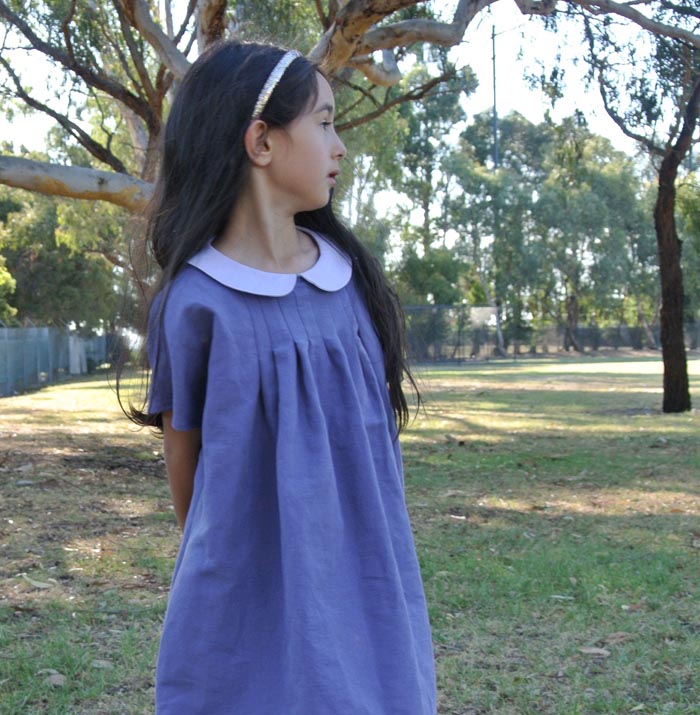 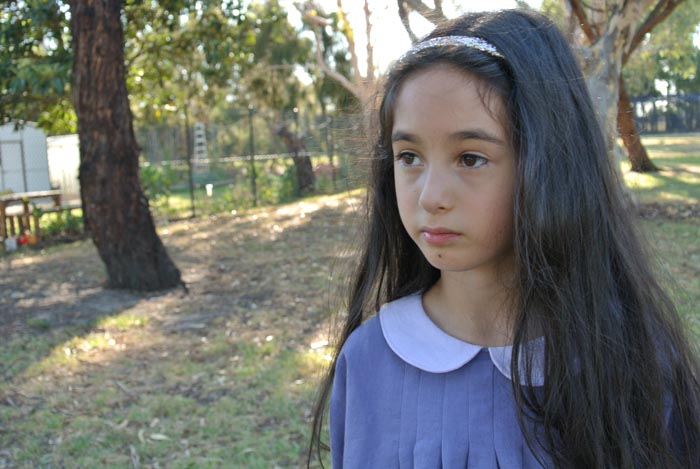 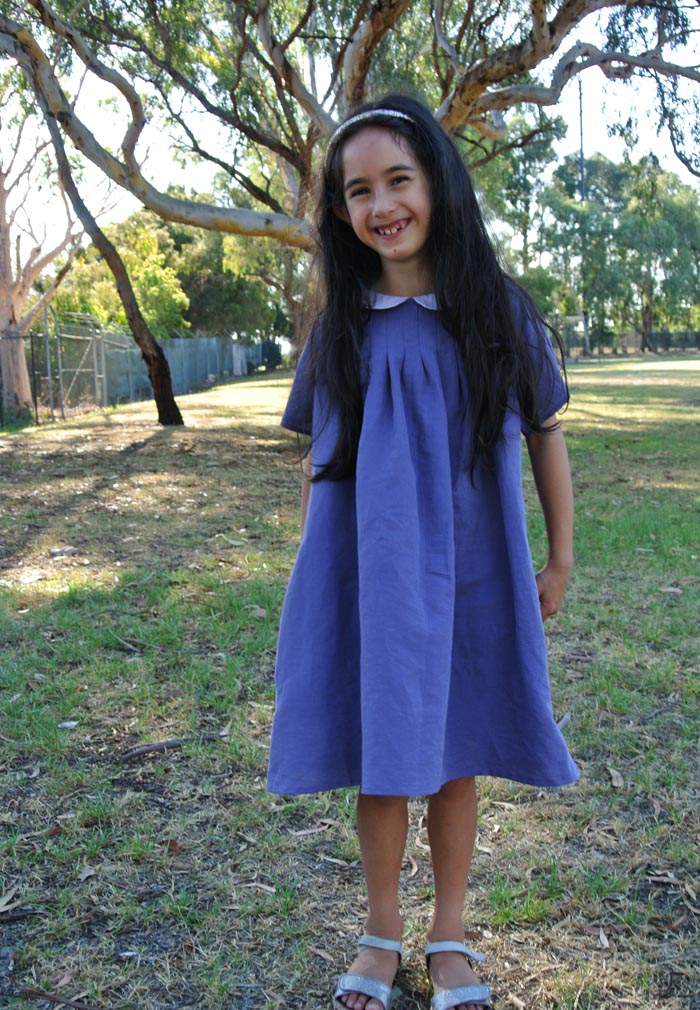 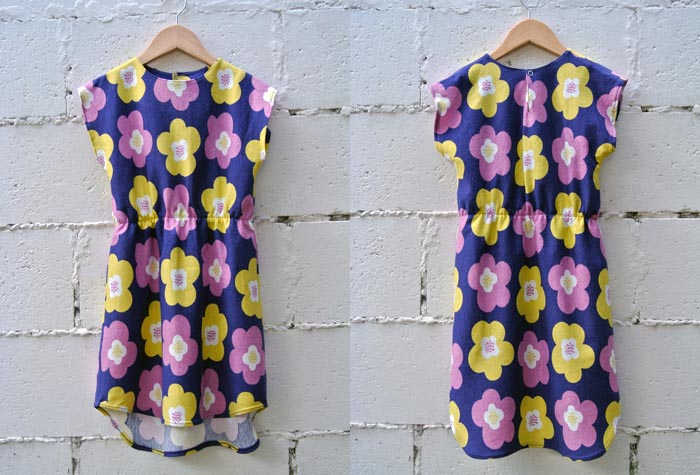 Another dress from Fu-Ko Basics, probably the simplest pattern in the whole book - just two pieces plus facings for the neckline. I wasn't sure how this would look on R or whether I really liked it at all, but I was after a nice quick sew after the confusing front placket dress, and that's exactly what I got.

A Japanese friend informs me that the pattern is called a 'Relax Dress', and that the fabrics used for the two dresses pictured in the book are French terry and jacquard knit. I used some rather colourful cotton jersey I'd picked up on clearance a while back, which wasn't quite the understated style I was after, but this was right in between Christmas and New Year and I couldn't be bothered to go shopping. As it turns out, I really like the way the big floral design lends the dress a summery, beachy feeling. Perfect with a pair of thongs for a day at the beach or pool... and having just had an amusing conversation with my son about the different meanings of certain words in American versus UK/Australian English, I feel obliged to clarify the word 'thongs'. These are not undergarments but footwear - what others might call flip-flops, only you'd sound like an idiot if you said that here, because thongs are the national shoe of Australia! 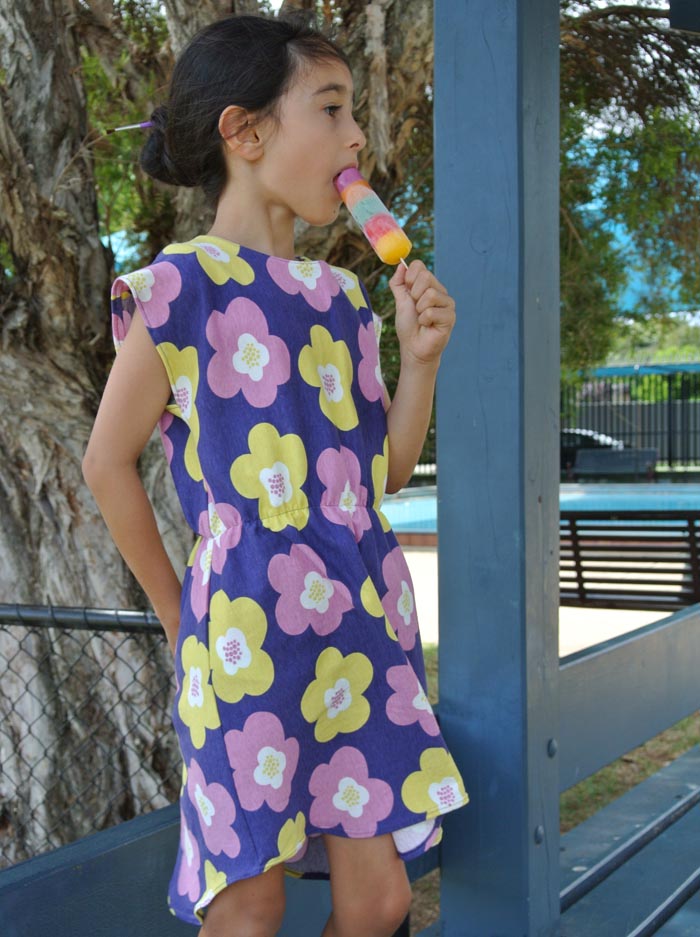 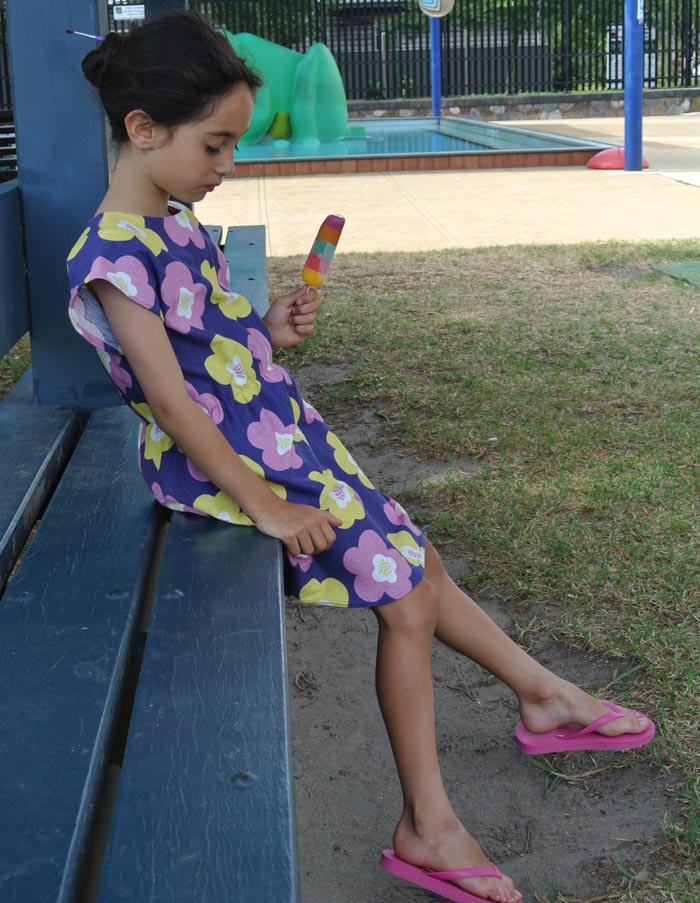 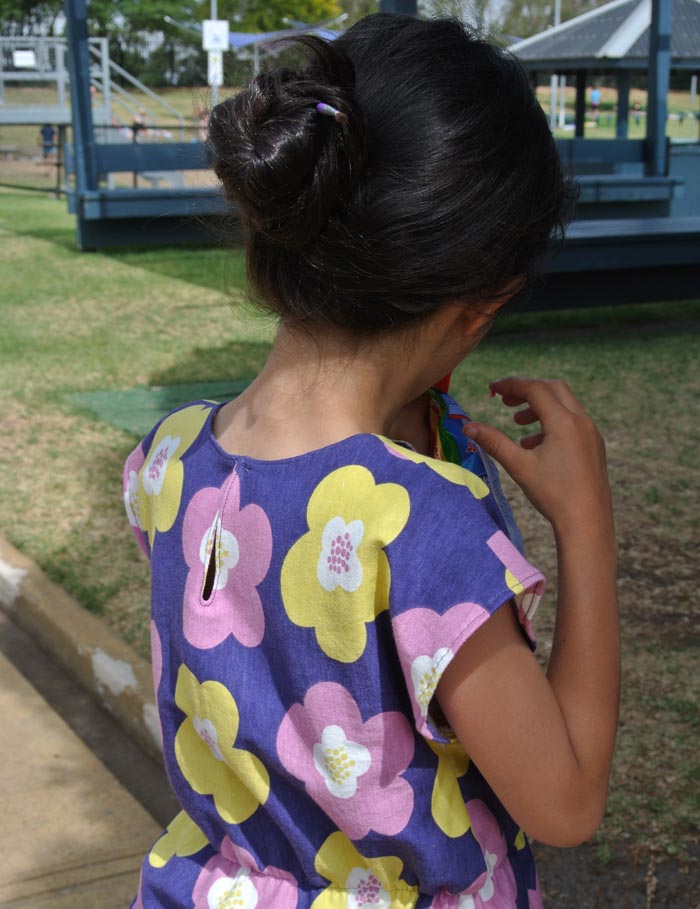 The Relax Dress has a high-low hem and the waist is pulled in by means of a strip of elastic stretched out and stitched to the inside (I sewed mine about 5cm lower than the line indicated on the pattern pieces). The back opening is meant to have a button but I skipped this to avoid tangly hair issues and put in a snap instead. The dress could be simplified even further by omitting the facings and back opening and binding the neckline using a stretch stitch - providing, of course, that you're using stretchy fabric, because I think the dress would be really nice in a light woven as well.

A quick and rewarding sew with a comfy, calming name - there's lots to love about the Relax Dress. And check out K photobombing the picture below! 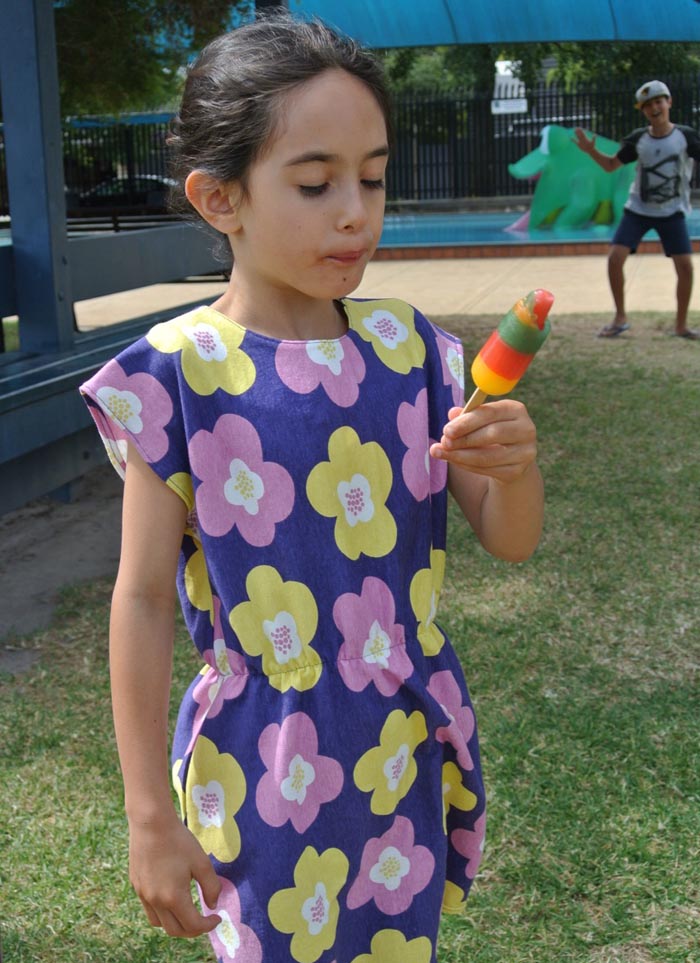