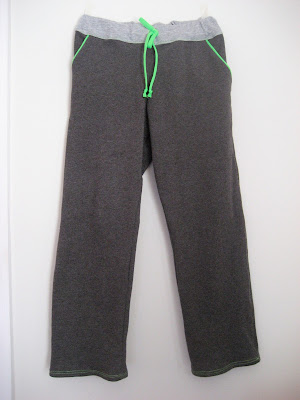 For my son K, to show him that I love him enough to (occasionally) sew something for him too. No pattern - just drafted from another pair of pants, with pockets added in the front. I used a pocket pattern piece and instructions from some shorts in Happy Homemade vol. 2, because pockets do my head in so I didn't think I could draft them myself. 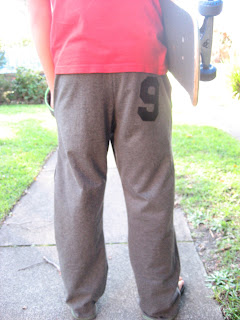 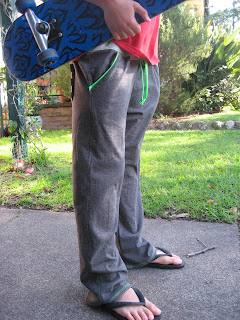 Fabric is cotton jersey from Spotlight and a bit of ribbing from the op shop, with some fluoro green synthetic stuff for piping and the tie at the front. Used some cool fluoro thread for overstitching, and put an iron-on sports number on the back: 9, for K's age. Naturally, I didn't notice the flaw in the jersey - a kind of raised bit with a tiny hole - until I had finished the pants, and naturally that flaw is positioned right at the front. I ironed a bit of interfacing on the back and am hoping the pants will last at least a few weeks before I have to mend them. And if you're wondering what the hell 'dacks' are, it's Aussie slang for pants (and 'dacking' someone is when you sneak up and pull their pants down, but don't tell my kids that because it'll give them ideas). 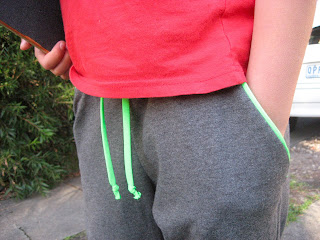 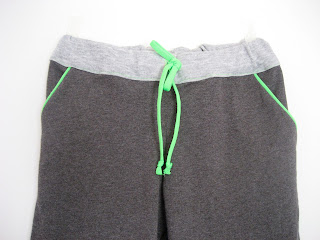 K saw the pants as I was putting the finishing touches on and said 'these are awesome!'. So, success.
Posted by marisa at 17:10