So here I am, already posting about something that is neither art, sewing nor craft. Party food is very dear to my heart. Especially when it doesn't contain sausages or mincemeat. Every year I devote weeks of research to The Cake, which - so far - has been different every time. But I think I've finally found one that will be repeated again and again because it is (a) filled with sweets, and (b) unbelievably easy once you know how to do it. 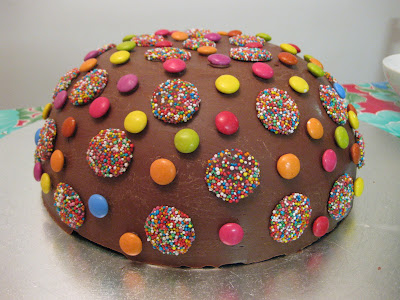 It's a round, iced cake covered with sweets, with a chocolate shell placed on top and decorated with more sweets. I followed the instructions in the book and used a large metal mixing bowl to mold the chocolate shell. After half an hour in the freezer it popped out easily. There's also a tutorial here that gives much the same advice. At K's birthday a couple of weeks ago I gave him a pestle to smash the shell with (couldn't get my hands on a toy hammer, as suggested in the cookbook) and when he did, this is what was inside: 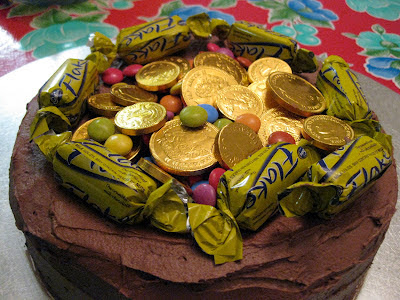 It was a huge success and Miss R has requested the same for her next birthday. How quickly she has forgotten her own cake, the construction of which just about killed me: 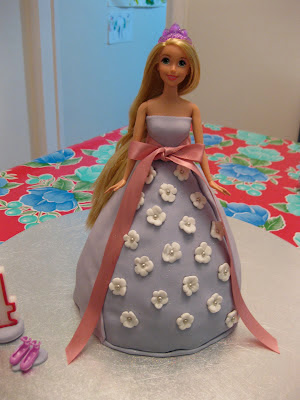 If I were to make the Rapunzel cake again I would NOT use a dolly varden pan (the one I used was lucky to survive. It only avoided being melted down and spat on because it had been loaned to me by a friend). Next time - if there is one - I will use round cakes of different sizes stacked on top of each other and carved into shape. Which will no doubt drive me equally crazy. But however overcooked or crumbly the cake, cover it all with fondant and it will look perfectly fine!
Posted by marisa at 23:38