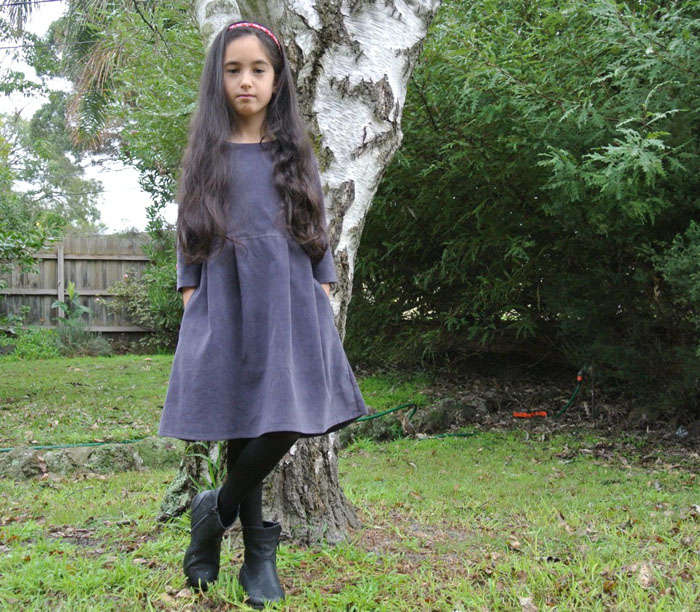 Another winter dress for R, if only to give the Arrietty outfit a break (it was worn five days in a row last week!). This is dress V from Kids' Clothes Style Book, a really cute pattern book from the same designer as Kids' Clothes Sewing Lesson Book. Both books include patterns for boys and girls, and both have a practical but stylish vibe - lots of basics, but with little details that make them special. This is one of the dressier designs, but still very wearable. 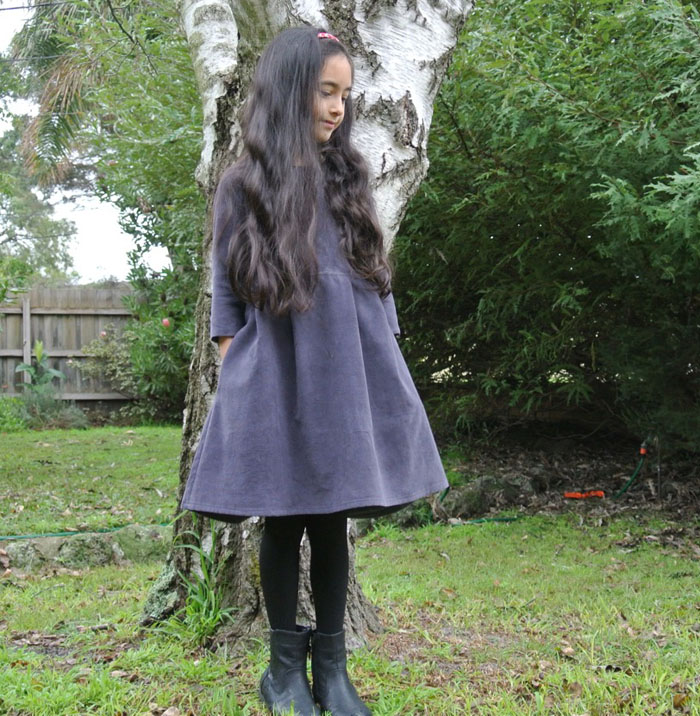 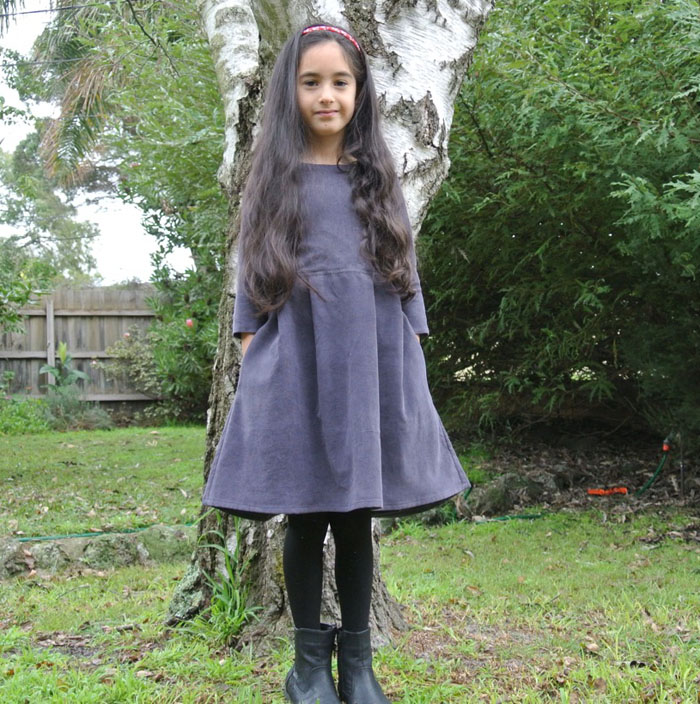 The dress has beautiful box pleats, in-seam pockets and three-quarter sleeves. Unusually for a Japanese pattern, it also has a zip at the back. Thanks to the zip fastening it's quite a fitted dress. I sewed size 110 with size 120 length and the fit is perfect. 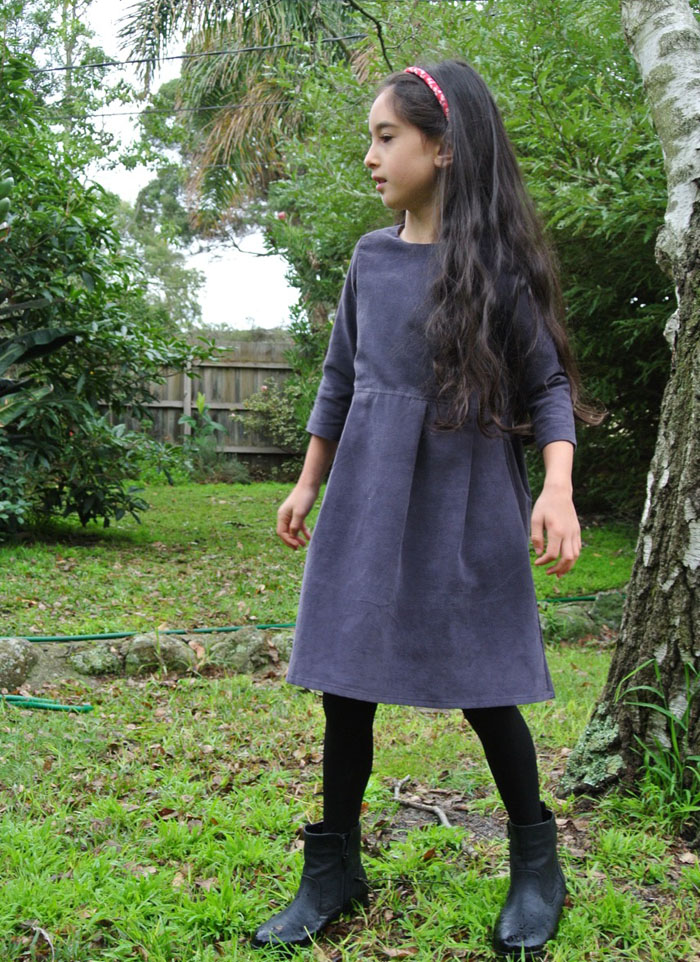 I made the dress in a super-soft pinwale corduroy and lined it fully with the kind of slippery, synthetic lining stuff that I usually avoid because I can't stand dealing with its fluffy, fraying edges - but I thought R would appreciate the slinky, non-sticking quality of the lining. The pattern is designed just to have facings, so adding the lining provided me with no end of problem-solving opportunities, the first of which was figuring out what to do about the pleats. Having tackled this conundrum (I treated the outer and lining as one and pleated them together) I battled through several more, eventually managing to achieve a reasonably successful lining, although it's a bit dodgy around the zip area. 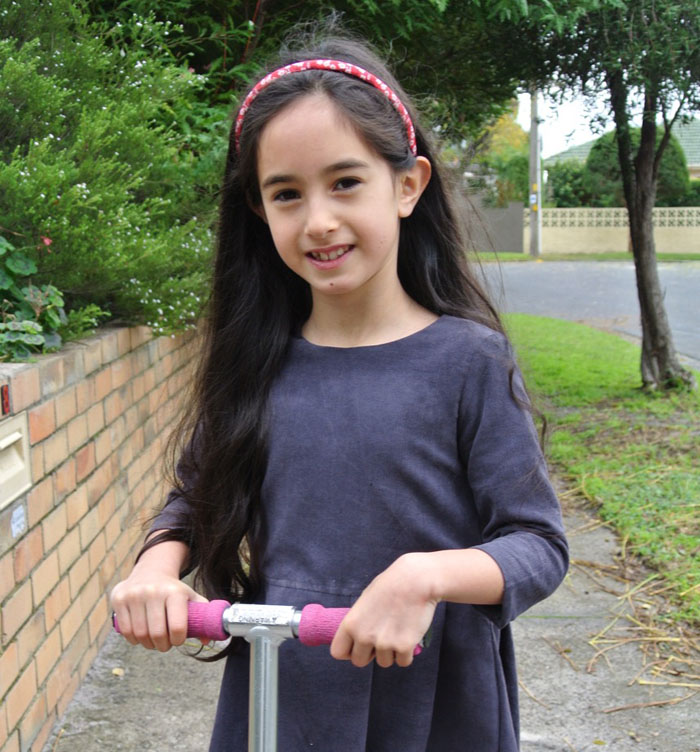 R put the new dress through its paces, climbing a tree, throwing a hoop and scooting - all as I was trying to get some photos. It was freezing today and so our shoot was short and sweet. I totally failed to get a photo of the lining, but if you just imagine some silky greyish stuff with embarrassingly childish hand-stitching around the zip, you'll get the idea. And if anyone has any suggestions for tights-friendly alternatives to Spotlight-style slippery lining, I'll be very interested! 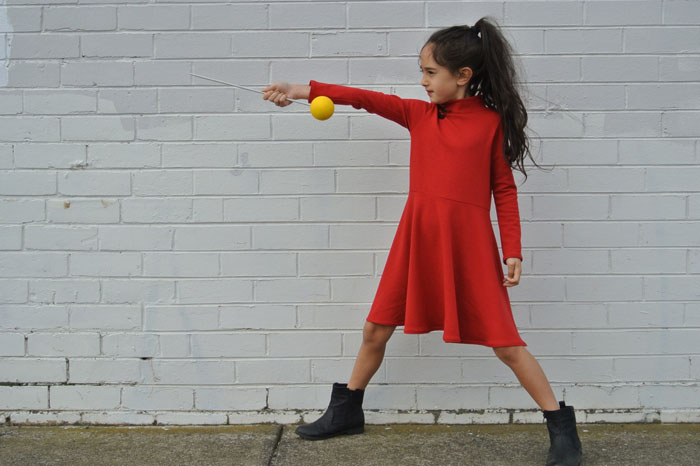 I love it when R makes dressmaking requests, and since seeing the beautiful Studio Ghibli film Arrietty she's been asking for a particular dress from the movie - a red one, with a high neck and long sleeves, that the tiny Arrietty wears to go 'borrowing'. 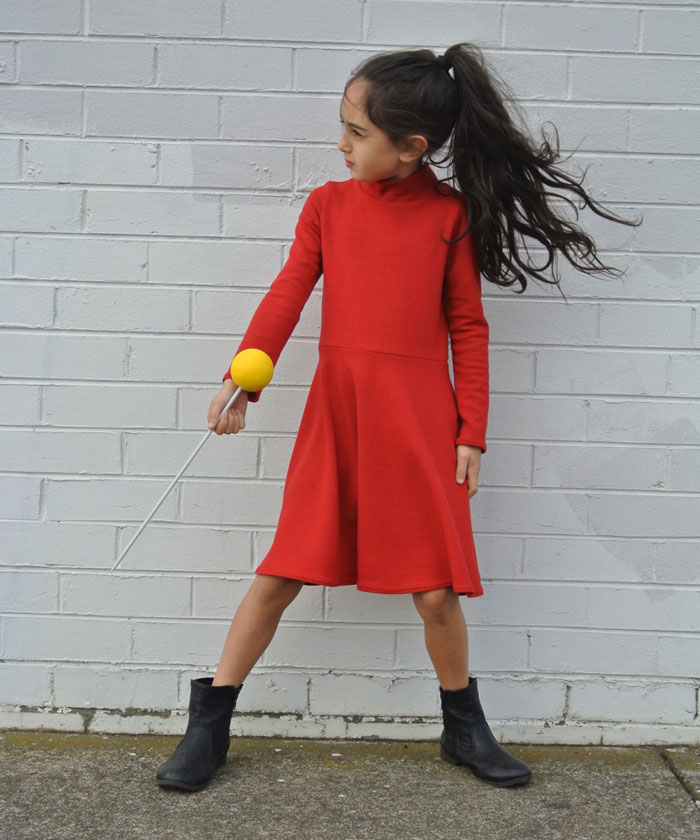 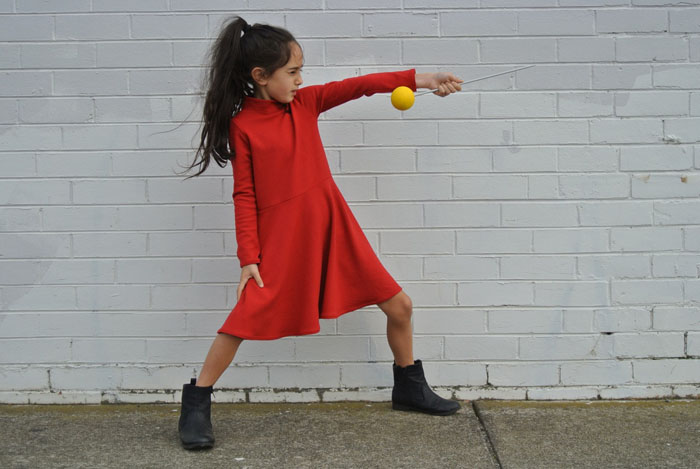 When R started asking for the dress it was nearly summer, so I told her she'd have to wait until winter. I thought she would probably forget about it, but no, the desire for the dress stayed with her and the requests became demands. Then I came across some thick, red wool jersey at Kim Anh Fabrics and knew this dress had to be made. There remained only the issue of how to draft it, and after much indecision I used the Oliver + S school bus T-shirt as the basis for the top part, shortening it considerably and adding a high neckband (much as Shelley did here - thanks for the inspiration!), then using Dana's First Day Dress for the skirt. All surprisingly easy and pleasant to sew, although it took a few fittings to get it just right. 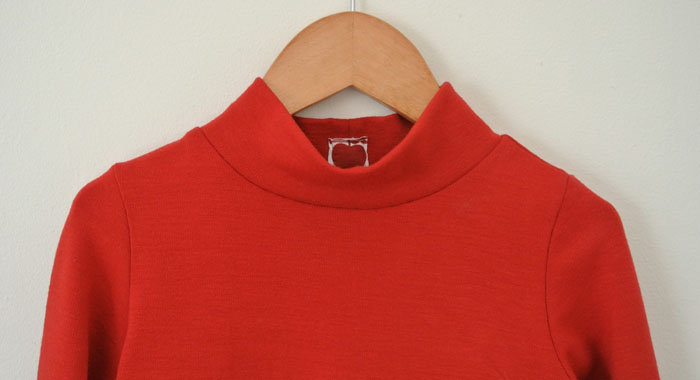 I sewed a little square of 'apple' jersey to the inside back neckline so R will know which way to put it on, since the front and back of the dress are just about identical except for the seam on the neckband. The dress is such a great fit on R, and has a beautiful twirl to the skirt (not that I could persuade her to demonstrate this for my photos - it was a cold and windy afternoon and our photoshoot had to be extra quick). 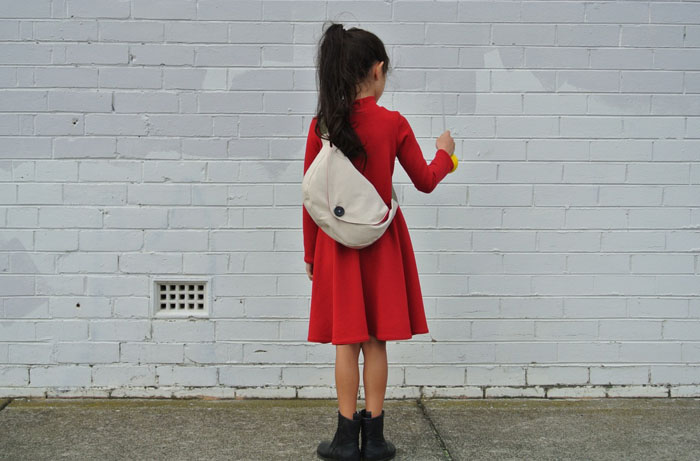 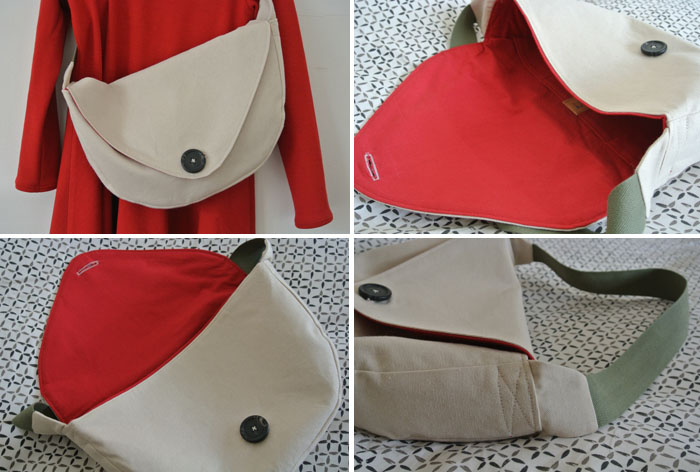 In the movie Arrietty goes 'borrowing' with her father, carrying a cross-body bag with a huge button. Just for fun I decided to have a go at the bag. Copying a cartoon character's dress and accessories can be a complicated process. Before you even draft the things you have to figure out what they actually look like, and how that might translate into real materials and designs. I thought I could improve on the bag a bit, making it a less sack-like and more practical, so I drafted a curved messenger-style bag, added some pockets to the lining and put a little stamped cat tag inside (R's favourite bit!). The tape I'd bought for the handle was too narrow so I improvised some 'adapters' to join the handles more neatly to the body of the bag. These echo the design of the bag in the film, conveniently enough! Despite the fact that I had no idea what I was doing, the bag worked out beautifully - in fact, I kind of want one for myself now.

In the movie, Arrietty is a tiny person who lives with her family beneath a house, surviving by secretly 'borrowing' items from the people upstairs. I  promised R that I would photoshop some pictures to make her small, so I enlisted the help of some local wildlife: 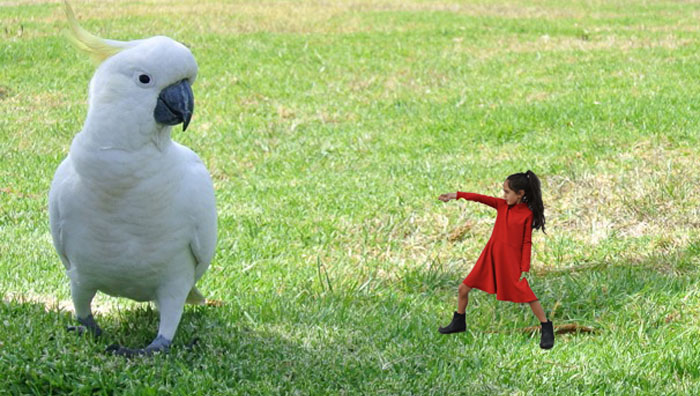 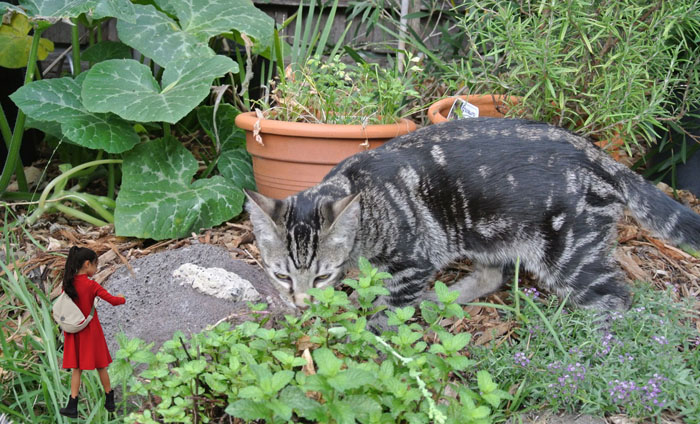 I made Arrietty's giant pin (which sadly got cropped out of the cat and cockatoo photos above due to my limited photoshop skills) from a knitting needle and a polystyrene craft ball, just so R would have something to swish around while I took the photographs. I was tempted to keep going and make Arruietty's other accessories too, but they can wait until Halloween (if that's what R chooses to dress up as. She dressed as Studio Ghibli's Kiki one year and that was super cute). Anyway, both the dress and the bag are practical and and R loves both of them. Besides, it is DEFINITELY the weather for high necks and long sleeves!